For significant events such as the COVID-19 pandemic, we can be tempted to believe that their effects are uniform across sectors. Leaning on the international Capital IQ database operated by Standard & Poors, this article shows that even in cyclical sectors, investors perceive the impact differently.

Solid data is of paramount importance for economic decisions and for the government pandemic containment measures alike.

As usual, we are at your disposal in this volatile period should you need the valuation of a company or asset. For all our clients, we employ data that lives up to the investment valuation standard.

The COVID-19 pandemic and the related economic crisis have been plaguing us for half a year. Let’s look at what kind of developments the capital markets expect. The predictions of equity analysts are aggregated in the S&P Capital IQ database, which we at RSM CZ can access and which we actively use for valuation.

For the Czech economy, the most fundamental factor is the development of the automotive sector, a typical example of a cyclical sector. Let’s look at the three largest European car manufacturers: Volkswagen, Daimler and BMW. Their market capitalizations, which have returned to the levels that prevailed 12 months ago, as you can see in the graph below, seem to suggest that business as usual has returned after the initial slump. 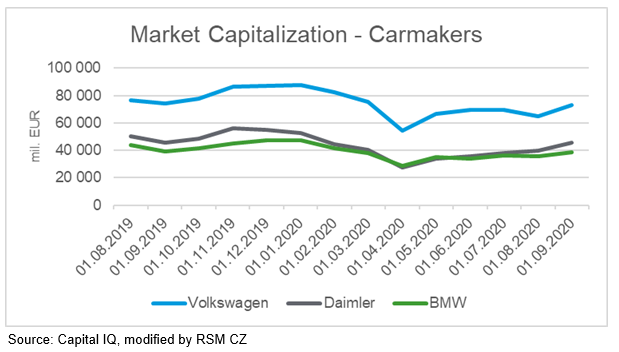 However, the expected sales for this year, which reflect the real economy better, are 13.2% lower year on year, and the level of 2019 will only be recovered in 2022. Below you can see the estimated total sales of the three largest car manufacturers in Europe, along with their previous development and the pre-COVID estimate from the beginning of this year.

What do equity analysts think about passenger air travel, one of the sectors that were hit hardest? While the data above suggests that the situation and outlook are not disastrous for the automotive sector, we cannot say the same about airlines. Once again, the data for the largest publicly traded companies (four in the U.S: Delta, American, United and Southwest, and three in Europe: Lufthansa, Air France-KLM and IAG, of which British Airways and Iberia are the most prominent members) shows that after plummeting by roughly 60% at the onset of the pandemic, their market capitalizations have barely moved up. Currently, they hover around 50% of the values of the end of 2019.

When will their sales return to their original levels? For this year, a decline by 56% is expected, followed by year-on-year increases of 65% in 2020/21 and 19% in 2021/22. This means that even in 2022, the predicted sales of selected airlines will be below their 2019 level by more than 10%. Moreover, it can be expected that these large players will be less affected than their smaller, weaker competitors. The estimated total sales of the three largest airlines, along with their previous development and the pre-COVID estimate from the beginning of this year, are shown in the graph below.

As usual, we are at your disposal in this volatile period should you need the valuation of a company or asset. For all our clients, we employ data that lives up to the investment valuation standard.

Advisory in acqusitions and divestments

Assistance with litigation and arbitration

Relations within group of companies

Services in the antitrust and regulation area

Transformation and restructuring of companies

Valuations for IFRS and the US GAAP